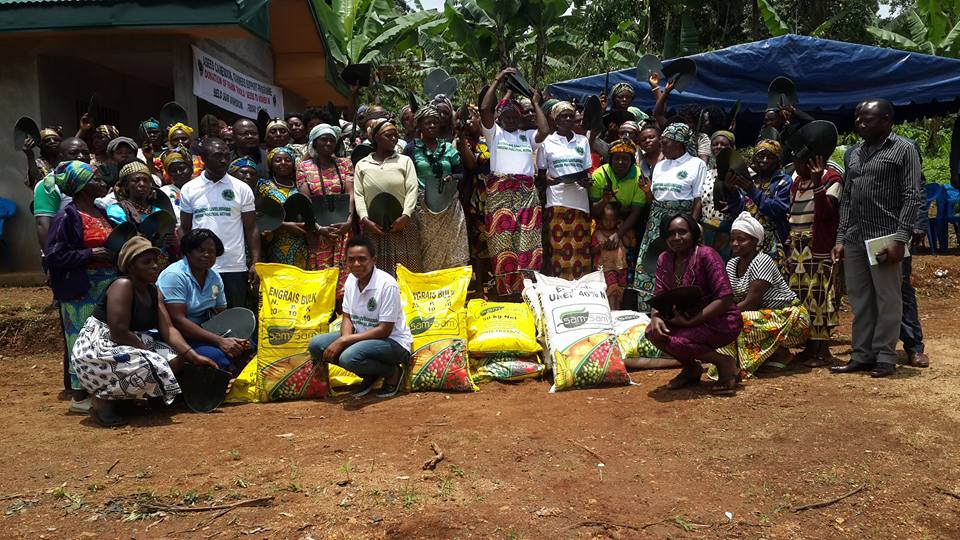 In line with one of its objective which is to promote sustainable livelihood through the enhancement of modern social, cultural and agricultural practices, ASEED donated farming tools and fertilizers to women in Belo subdivision, which among them had 3 women large groups on 15th April 2016. This initiative was also supported by North West Cooperation Association (NWCA) which aimed was to promote and sustain the livelihood of women and their in these communities who were mostly farmers. The ceremony started at 11:00am with the agenda for the day read out by ASEED new President, Dr. Ngam Confidence which was closely followed by a brief welcome speech from the G.M NWCA, Mr. Waindim Timothy. He presented the team who came for the donation with the formal introduction of ASEED new President, Dr. Ngam Confidence, the staff and communication officer as well as the two journalists from Bamenda. He also acknowledged the presences of the sub delegate of agriculture, Mr. Agyingi Christopher and Sub delegate of youth affairs, Mr. Fombang Genesis and everyone who came out. A word of prayer was offered without much talking he handed over the floor to the Sub delegate of agric Belo; Mr. Agyingi Christopher who was better place to brainstorm on how the fertilizers given to the women, could be used. He first of all acknowledged the fact that the fertilizer were given at the right moment of this planting season and further  explained in details to them; that the fertilizers could be applied on their crops (maize, beans etc) using the cover bottle of any brassieres drink. According to the sub delegate of agric Belo, it was advisable for the farmers to mix both fertilizers and applied to their crops since most of them had already carryout planting. But in case where they had not done so, it was advisable to first of all measure a cover bottle of 20/10/10 and apply to each maize plant when it was about 25/5 leaves or 6 weeks while Uree was to be applied using half a cover bottle when the maize plant was about to bear flowers. They were also told the advantages of these fertilizers on their crop which that of 20/10/10 was it help maize plant to bear seeds and Uree on the other hand enable the maize plant to become green. As for their disadvantage they were told not to apply too much of both fertilizers which could kill the plant and at times cause sickness like stomach ache to those who earn up consuming the crops.

The handling over of the farming fertilizers and hoes was presided by ASEED President and Sub delegate of agric Belo. Each woman present at the occasion received a hoe while the remaining hoes were shared amongst the women groups. As for the fertilizers they were donated to farming groups according to how many members each group had. The group with many members received the highest numbers of fertilizers bags. The president went ahead to explain that the hoes were given out without their sticks because it was difficult to determine the shape of the sticks which could be suitable and comfortable for each women to work with considering the height and sizes of their body. And so he pleaded with them to bear in mind with ASEED after receiving the hoes; to kindly look for sticks which could be convenient for them.  He also made mention of the fact that in the months ahead ASEED was going to distribute Vitamins to both children and women in Belo sub division and other sub divisions in Boyo division and the North west region in general.

In the closing remarks the G.M of NWCA was very happy and really appreciated the huge turn out of the women who made the occasion a big success. He also highlighted the distribution of the vitamins which had earlier been mention by the president and assured the population that more medical outreach programs were going to be carried out in the near future like what the late CEO of ASEED did last year in the Njufor community. He went ahead to introduce ASEED other areas of intervention which involve, School Support program and ask them to identify children whom ASEED could assist with their School needs come September 2016 and he promised to carry out more farming projects in the future. A word of thanks was also offered by one of the women beneficiary who spoke on behalf of all present at the occasion which was closely followed by a word from the President of the Albinos group, which was created last year thanks with the help of the late CEO of ASEED. The occasion was sealed with pictures taking and the departure of the ASEED team back to Bamenda town.